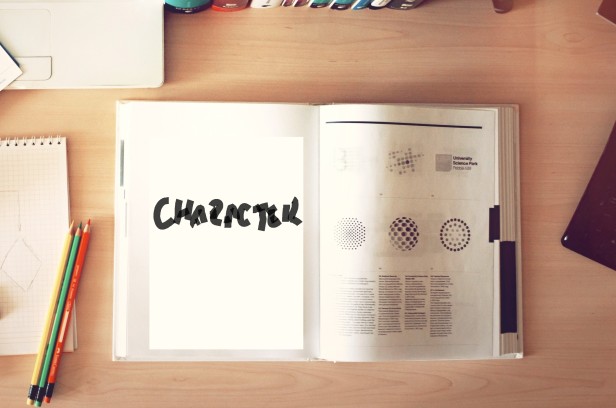 The last thing I want to work on is my character. It’s like someone familiar I see across the room I barely acknowledge, for fear of making eye contact. Or like a slightly crooked painting on the wall I hope no one notices. Perhaps if I ignored it, the flaws will just go away. I guess I don’t have enough character to work on my character.

But I see the effects of the lack of character both in myself and in others. I see gifted, talented people, who grow in their skills and gifts, but not in their character. Eventually bad things happen, and without the character to sustain or guide them, they crumble; and like dominos, other things fall and crumble around them. Growing in character is serious and crucial for everyone – whatever stage of work/life we are in.

Work builds character. Work has been my primary teacher after college. Along with striving to do good work, over the years, as I transition from job to job, I realize how I respond when bad things happen is the stuff that builds character.

Most of us work with people – inside the organization and/or outside. Though I love my co-workers, we are all human beings and so there are bound to be good days, bad days, as we work together. But unfortunately, there are some people who are consistently challenging to work with, toxic even.

I used to work with a man who constantly treated me in a condescending manner. In the same meeting, he would minimize or dismiss whatever I said, but would treat my white male colleague (who said the same thing) with respect. At one work party, he introduced me as “practically American,” referring to me as a perpetual foreigner even though I’ve lived in the US most of my life.  I was furious.

This scripture from Romans came to mind:

“Do not repay anyone evil for evil, but take thought for what is noble in the sight of all. If it is possible, so far as it depends on you, leave peaceably with all”  (Romans 12:17-18, NRSV).

How do we respond to someone who doesn’t treat us well?

Work naturally comes with pressure – pressure to achieve, manage people, lead. However, there are times when pressure at work can feel more intense than others. We also hear of people describing their work environment as a “pressure cooker.”  In these situations, God can be building our character – teaching us how to handle pressure, how to persevere, or be faithful in the midst of hard situations. However, it might also be time to go.  Especially when under pressure, listening prayer, seeking the counsel of people of character and spending some time in scripture can really help.

“…suffering produces endurance, and endurance produces character, and character produces hope, and hope does not disappoint us” (Romans 5:3-5, NRSV).

How do we respond to pressures at work?

“A key finding from our survey may partially explain the preference for negotiating with someone of the same race or gender: More than a third of female respondents believe they’ve been passed up for a raise on account of their gender or race. Perhaps women feel they are less likely to be rejected if the person across the negotiation table looks like them.”1

At its core, working on our character is doing what God requires of us: “… to do justice, love mercy, and walk humbly with your God” (Micah 6:8).

But we need the Spirit’s help to work on our character.  We can’t do it alone.

Our character gets tested and built based on how we respond to people, pressures and pay at work. Work is an incredible teacher if we are willing to be humble students of character.

1 Jones, K., Sept 1, 2016, “Gender Can Be a Bigger Factor than Race in Raise Negotiations” [article] Retrieved from: https://hbr.org/2016/09/gender-can-be-a-bigger-factor-than-race-in-raise-negotiations

2 thoughts on “Working on Character”